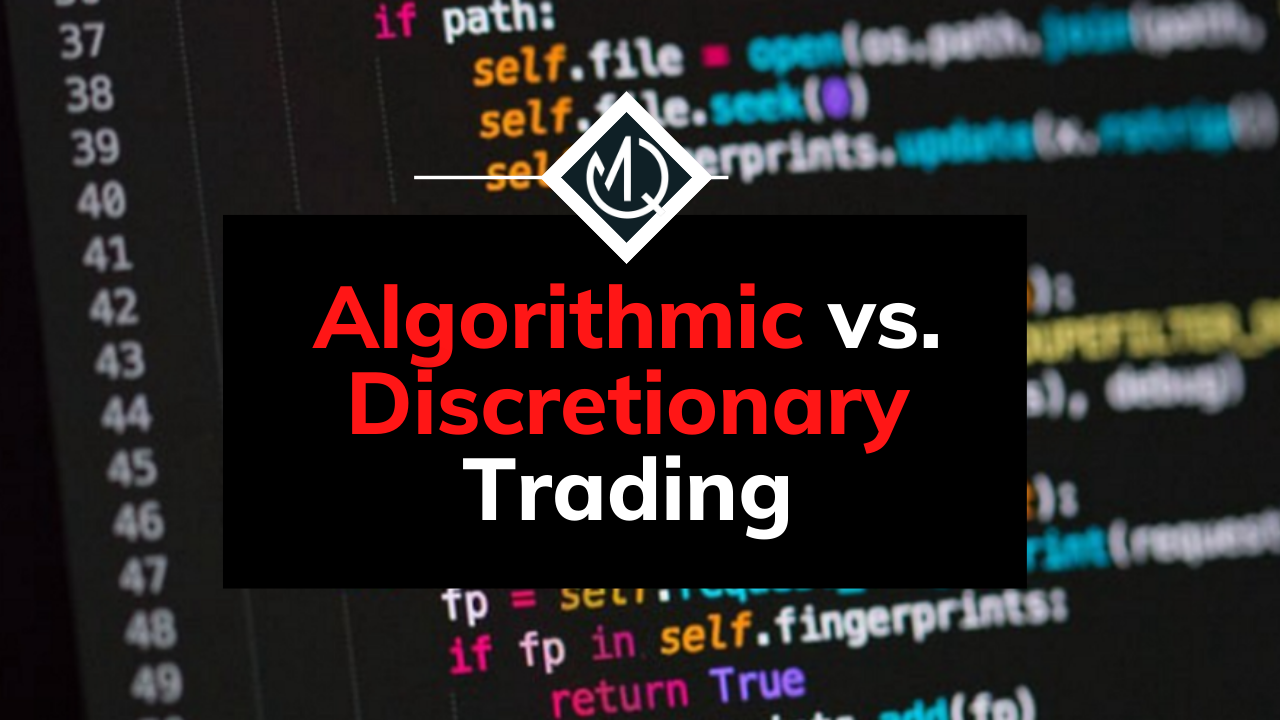 Algorithmic vs Manual or Discretionary Trading

The idea of a trading floor filled with people yelling at each other is, of course, a thing of the past. Nowadays, every order submitted to an exchange is made through the internet, although most retail investors do it via a broker.

We can distinguish between who or what created the order: it could have been triggered by an automated algorithm that follows a predefined set of rules (algorithmic trading) or by a human manually submitting an order (manual or discretionary trading).

Throughout this article, we will go through the main differences between both types of trading, their advantages and disadvantages, and the different skillset required for each.

When comparing both types of traders, I’ll only be covering the subset of each that places orders on a somewhat regular basis. I won’t discuss, for example, portfolio managers that rebalance their portfolios quarterly. I will also assume that the discretionary traders mainly focus on analyzing charts since this is the most probable case for retail investors.

Algorithmic trading has faced massive adoption by hedge funds and proprietary trading firms during the last two decades. Additionally, because all crypto exchanges and most stockbrokers nowadays offer an API to place orders in a programmatic way, retail investors started implementing their own algorithms.

On the other hand, it is essential to note that discretionary trading is far from having disappeared and still has a predominant place in the financial industry.

The core competencies of each professional are also very different, and we will cover them in detail in the following sections.

Everyone has a plan until they get punched in the face

*: In many cases, the strategy was not even profitable, to begin with. This critical distinction also relates to the point made about the general lack of statistical knowledge in the day trading community.

In the most general case, algorithmic trading tends to have a more technical and scientific approach when compared to discretionary trading. This, in addition to the remaining differences that we will cover in this section, lead to algorithmic trading having a greater probability of success than manual trading.

Algotrading can quickly scale a strategy across multiple assets

Manual traders only can process a small and finite number of tasks simultaneously, meaning that they will only be able to trade a reduced number of assets at any given time.

Algotraders, on the other hand, benefit from almost infinite scalability. If a strategy is consistently profitable, it is a trivial step to incorporate as many assets as convenient. The marginal server cost of trading an additional asset is close to none compared to hiring and training a human being to manually trade another set of stocks or cryptocurrencies. In this article, I cover trading multiple assets at once in Python.

Algotrading allows focusing on research instead of trading

The fact that trading algorithms can run without human assistance has the additional benefit of allowing algotraders to research and test new strategies without the opportunity cost of not trading.

Given that most trading ideas should be discarded because they don’t generate alpha, it is crucial to assign as much time as possible to generating and testing lots of them. Additionally, programming knowledge increases the speed at which traders can test their ideas.

This leads to algotraders testing more ideas per unit of time compared to day traders. Mathematically, this leads to them being more prone to finding profitable strategies (ceteris paribus).

Unlike humans, algorithms can process multiple gigabytes of information per second. This allows algotraders to implement refined and complex trading strategies that not only resort to a few bars of historical prices or a handful of technical indicators.

This is the reason behind the mass adoption and commoditization of alternative data sets used for trading purposes. Live credit card payment trends, high-resolution satellite images, and live freight data are only some of the most common datasets that algorithmic traders use daily.

Similar to the previous point, it is common for algotraders to have multiple strategies running concurrently. This diversifies not only the risk of the aggregate portfolio but also the risk of alpha decay in general.

Most often than not, day traders only have a single trading strategy at any given time, and this can lead to days and even weeks of inactivity if they stop performing as expected. Discretionary traders will often face prolonged periods of time not participating in the markets until they find a new strategy that fits their requirements.

Given that we determine the set of rules that govern the behavior of an algorithm, we can perform backtests and multiple statistical tests that are not possible for discretionary traders. Being able to do so is perhaps the most critical distinction between both types of trading and their corresponding ability to become profitable.

Despite this, algorithm developers that don’t possess these skills will have a tendency to use backtests as a means to overfit the parameters of a strategy. This will lead to them ending up with a set of rules that perfectly represents past noise in the data but ultimately fails to find patterns that are expected to be seen in new data points (the future).

Experienced algotraders avoid these pitfalls by avoiding lookahead bias, separating past data into training and test sets, and by doing walk-forward optimization. Having a clear understanding of the most relevant metrics of a strategy and its behavior across different market regimes is a clear advantage when compared to day trading.

Discretionary trading oftentimes incorporates a component of “intuition” or “gut feeling” into the decision process, making it impossible to reduce it to a set of rules and backtest it. This intuition has a tendency to change over time, meaning that the trading log is composed of different strategies used in different periods, and the distinction between them is not clearly defined.

In contrast to discretionary trading, algotraders develop core competencies that are also valued in other industries. This allows them to make lateral career moves that manual traders would probably be unable to do. The data science and DevOps skills acquired by algorithmic developers are sought-after skills in other industries.

On the other hand, day traders will have difficulty applying their experience in other sectors and would most probably have to accept a significant salary cut if they choose to stop trading and switch careers.

Traders whose main occupation is not trading will benefit more from algorithmic trading than from manual trading. During developing trading strategies, they will be forced to learn from various topics that might lead to new career opportunities.

If adequately implemented, algorithmic trading is a superior choice to discretionary trading in most cases. This can be seen by the simple fact that most of today’s trades are done by algorithms. The amount of data that can be consumed and processed by a computer is many orders of magnitude greater than what is possible by a human being. Nonetheless, both types of trading can lead to huge losses if executed by inexperienced traders.