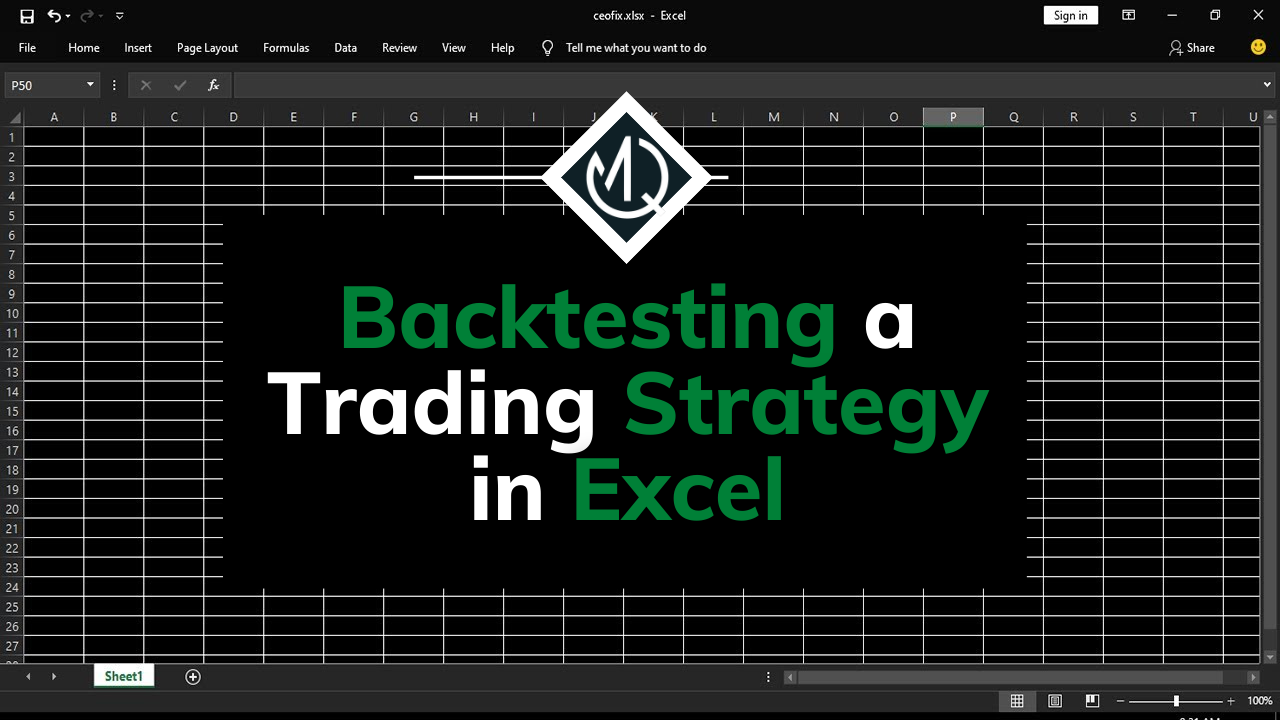 Backtesting a Trading Strategy in Excel

Due to its popularity and ease of use, Microsoft Excel has become the default tool when it comes to quickly prototyping an idea, model, or even a simple trading strategy. Although there are plenty of sophisticated backtesting websites or libraries for every programming language imaginable, it is still a good idea to know how to create a backtest manually in order to make sure we understand what is going on.

In this article, I’ll go through a step-by-step example showing how to backtest a simple strategy consisting of two moving averages that cross each other and create buy and sell signals.

In order to create a strategy using Microsoft Excel, we first have to get historical data and calculate the indicators. The next step consists in using said indicators to create the trading rules that will generate the buy and sell signals. Finally, the last step consists in calculating the return of the strategy and its benchmark, in addition to other metrics that are commonly used in the industry.

You can also follow along with the video at the end of the article, which exactly replicates the article.

Getting Historical Data for Microsoft Excel

To get started, we can go to Yahoo Finance and download historical data. Although limited to just a few days, this source allows downloading intraday data. You just have to go to finance.yahoo.com, select a stock, click on the “Historical Data” tab, select the desired time period and frequency and click on “Download.”

Having said that, if you want to replicate the exact results of this article, download the raw data from this link: Download Initial Worksheet.

In this article, we will use two moving averages with different lengths. The first one, which we will call “Fast SMA”, will cover the last 8 prices, whereas the “Slow SMA” will be the average of the last 16 periods.

We can use the “=average()” function in order to calculate both moving averages (MAs). But to allow for easily changing the number of periods covered by each MA, we will use the offset function to parameterize the number of rows used for the calculation.

Let’s break this down step by step:

Repeat the same step in Column D for the second SMA (slow). Refer to the video at the end if you are having issues. Don’t forget to apply these formulas to the entire time series (fill the columns).

In column E, we will do that calculation. For example, the formula in cell E17 would be:

This will return TRUE or FALSE, telling us at any given time if we are holding the asset. In other words, whenever we switch from FALSE to TRUE, we are buying the underlying stock, and when we switch from TRUE to FALSE, we can conclude that we sold it. Fill the remaining cells from column E with the same formula.

Calculating the Performance of a Trading Strategy in Excel

Returns of the Buy and Hold Benchmark

We now have to calculate the performance of our trading strategy. We will also calculate the returns of the Buy & Hold Strategy to use it as a benchmark. The B&H is none other than buying in the first period and selling in the last one. In other words, it is the asset’s return over the entire time horizon.

To calculate the logarithmic return: in cell B3, use the following formula:

Now you can apply this formula to the remaining cells in the series.

If you SUM the entire range of logarithmic returns, you will get the returns of holding the asset. In other words, that sum is the same as taking the last price and dividing it by the first price. That is the return of the B&H Strategy.

Returns of the strategy

Now, let’s calculate the returns of our strategy, which is none other than the sum of the daily returns where we had a position in the stock (cells in column E are TRUE). For the remaining days, our strategy did not have any return since we were holding cash instead of the asset. For cell G3, the formula is the following:

Now, if we calculate a SUM over the entire column, we will get the return of our strategy. Herein lies the suitability of the logarithmic returns.

Exposure time measures the percentage of days we are exposed to the volatility of the asset. In other words, it is the ratio of the number of periods where we held a position (column G is TRUE) over the total number of periods of the backtests.

In any given cell, use the following formula to calculate exposure time:

I also added two columns, one for the cumulative return of the B&H and another one for our strategy. Finally, I created a time series chart in order to visualize the evolution of both. I won’t be covering this final step since the article is already quite long, but you can find it in the final file with the strategy.

The final result of our strategy looks as follows:

A Warning on Backtesting a Strategy

If you followed along with this tutorial using the file provided, you’ll notice that the returns of the strategy are greater than the ones we would have obtained by just buying.

If you want to tweak a strategy without increasing the risk of overfitting, consider splitting the dataset into two periods. Design the strategy with the first period and only use the second period to test if the results are similar. If you go back and forth between both periods, you’ll be overfitting again.

Additionally, trading with a strategy instead of just holding the asset has many consequences. The most relevant are the following:

Video Tutorial of the Article