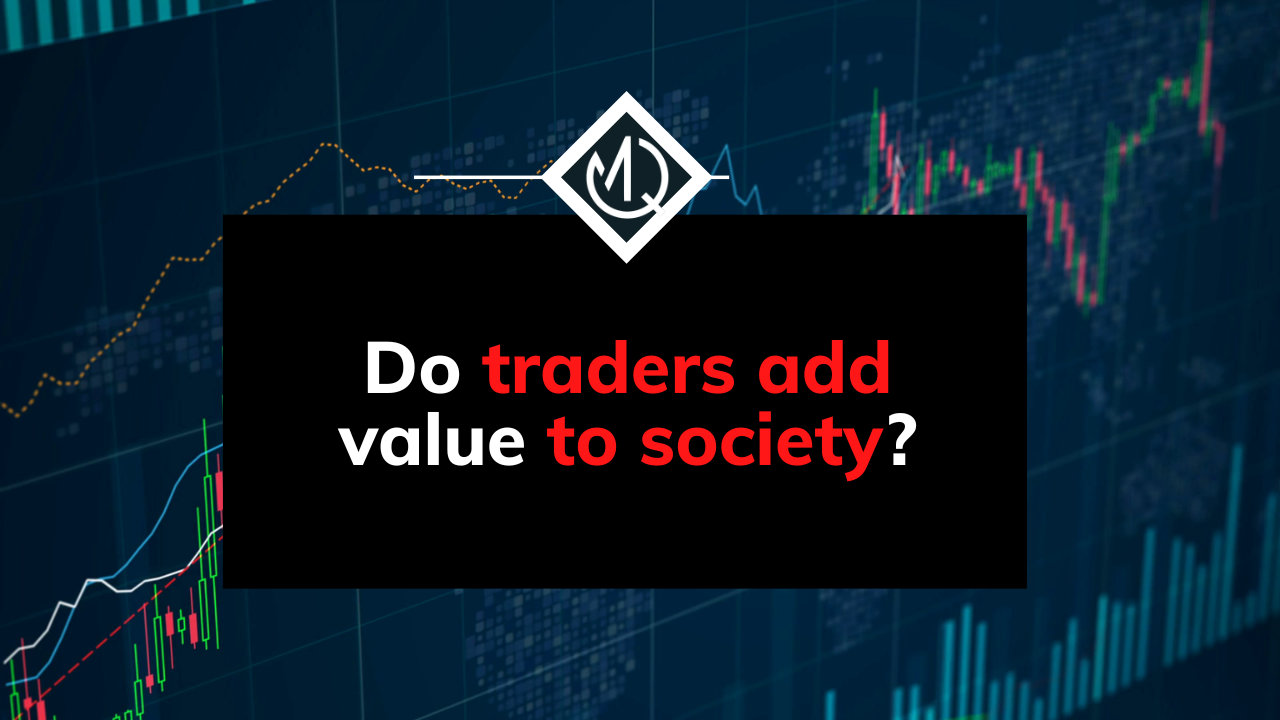 Do traders add value to society?

Traders are fundamental market participants. With the objective of taking profiting from small price variations that occur as a result of the interaction between supply and demand, they generate liquidity and foster overall efficiency in the market. Traders often use technical analysis to try to predict future price movements, keep an eye on intraday market supply and demand fluctuations in order to anticipate strong volume movements, and estimate market sentiment.

Having said that, a common question asked not only by non-participants but also by key players in the market is whether these individuals benefit society in some sort. In this article, I’ll try to list do my best to talk about the numerous ways in which they effectively do so and to what extent their existence is beneficial to stock markets in particular and the economy in general.

Traders contribute to society and the economy indirectly in multiple ways. They focus on high profitability, which helps to better allocate resources in the market. They are the ones that provide investors with liquidity and always take the opposite of their trades, either through market-making or fading. Traders are a necessary part of the market.

How do traders add value to society?

There are many ways in which traders add value to society, among which we can mention the following:

In the following section, I’ll discuss each item in the list above in further detail.

In finance, liquidity refers to the ease with which an asset can be exchanged for cash. For companies, it is important to know which of their assets are liquid because they might need them to pay debts in the short term or cover some unexpected expense.

Liquidity is also a fundamental concept when doing any investment analysis because it plays an important role in the price that will be paid for an asset. When a person buys or sells shares, they are most likely dealing with a market maker, who sets prices to both buy and sell the market and are the prices at which they are willing to buy or sell shares. To make a profit and protect themselves from losses, market makers buy shares at a lower price and sell them at a higher price. The difference between these two prices is known as the bid-ask spread; the more liquid a stock is, the tighter that spread will be.

Generally, stocks traded on stock exchanges are substantially more liquid than other assets. This is because they are usually bought and sold by many people, which means that it is easy to exchange shares for cash. Less liquidity tends to mean that investors will get worse prices for their investment due to increased transaction costs and slippage.

If a given market is illiquid, it is usually also more difficult to sell or convert that asset into cash. Illiquid stocks have wider bid-ask spreads, and increased transaction costs due to their shallow market depth.

These assets tend to be less well-known, have lower trading volumes, and generally have lower market values as well. Due to a lack of investors or speculators who are ready and willing to buy the asset, illiquid assets can be difficult to sell quickly, which translates to higher risk when investing.

Traders, in general, increase the stability, liquidity, and transparency of the financial markets and therefore. Their participation in the market allows other longer-term investors, such as regular individuals or mutual funds, to invest their resources more efficiently and at a lower cost. Thus, without actively seeking to do so, traders play a major role in increasing long-term investing.

Traders increase efficiency in the economy

Traders increase economic efficiency by making it easier for financially strong companies to raise funds in order to continue growing. In this way, when a trader invests in a company whose stock price is expected to increase, it allows it to increase its operations, acquire new companies or build a better portfolio to attract more investors.

In order for traders to succeed at their job, they have to correctly differentiate good companies from bad ones, thus assigning their resources to the ones that are expected to grow. If we assume that one average they do so, traders create strong and helpful signals when it comes to allocating assets in a way that maximizes growth.

Traders are also important to retail investors. An investor must pay the asking price to buy an asset and receives a purchase offer when selling it. The smaller this difference between the purchase and sale price called the spread, the investor pays less and, therefore, will benefit from higher profits. Competitive market makers injecting liquidity into the market result in tighter spreads, thus benefiting investors.

The traders’ business has arguably changed in recent years due to the appearance of new technologies that are 100% digital. These technologies have made it possible to improve and reduce the costs of accessing capital markets, and the investment industry has thus been considerably democratized.

Extracting information that is critical to investor decision-making can be extremely important, and with more data than ever, machine learning can increase the ability to process it while also becoming more accessible.

In finance, machine learning is used to detect fraud, automate trading activities, and provide financial advisory services to investors. Instead of removing people from the equation, the digitization of markets and assets, combined with the ability of machine learning, allows people to focus their efforts in different ways that create additional value.

The development of different platforms managed to streamline processes in recent years, and financial markets were among the first to adopt new technologies.

For example, quantitative traders, which are highly specialized professionals who apply quantitative methods to value financial products, constantly find new ways to apply novel techniques from various STEM fields, such as physics, mathematics, and computer science. Thus, the applicability of such methods in the financial industry is an additional reason for funding such important endeavors.

If you’re somewhat familiar with the Python programming language, you’ve surely heard of the Pandas library. In fact, the financial industry is the reason behind the creation of Pandas.

If you’ve never heard about this, Pandas is a software library written for the Python programming language for data manipulation and analysis (arguably the most used library). Wes Mckinney, the creator behind the library, came up with the idea to develop it while doing quantitative finance at AQR Capital around 2008. Frustrated by the cumbersome data analysis tools, he learned how to program in Python and began building what would later become the most widely used library in the entire Python ecosystem.

Pandas offers data structures and operations that are extremely convenient when transforming and performing numerical operations on tabular data and time series. The name is derived from the term “panel data”, an econometric term for data sets that include observations over multiple time periods for the same people.

Another example where you can see the advancement of technology is in high frequency trading (also known as HFT), a trading approach that uses powerful and extremely efficient algorithms to process a large number of orders in fractions of a second. It uses complex algorithms to analyze multiple markets and execute orders based on their current conditions.

In some sense, HFT has been around since the 1930s, when traders physically bought and sold positions on the exchange, with high-speed telegraph service to other exchanges.

At the beginning of the 21st century, HFT transactions had an execution time of several seconds, whereas in 2010, it had already decreased to milliseconds and even microseconds. It became popular when exchanges started offering incentives for companies to add liquidity to the market. In the early 2000s, HFT still accounted for less than 10% of orders, but this proportion would soon begin to grow rapidly. Nowadays, it is estimated that an HFT algorithm is involved in roughly 50% of all trades done in US-based stock exchanges.

Financial institutions are rethinking the ways in which they operate and invest in order to be as efficient as possible. Technologies such as artificial intelligence and econometric time-series analysis help users and financial experts make better decisions.

A great advantage for traders is the possibility of working remotely since their work only requires a relatively fast computer and an excellent internet connection. This means that traders can carry out their work from any city in the world, where they will consume local products, and services, pay taxes, and so on, thus helping the economy of the place where they are. On a social level, traders can also contribute by adding value to other people with their knowledge and experience.

As can be seen, there are multiple ways in which traders effectively help the economy. It goes without saying that their participation in the markets also led to some well-known unfavorable events. Since these tend to be well covered and common knowledge, I focused this article on listing the ways in which they positively affect society and the economy.