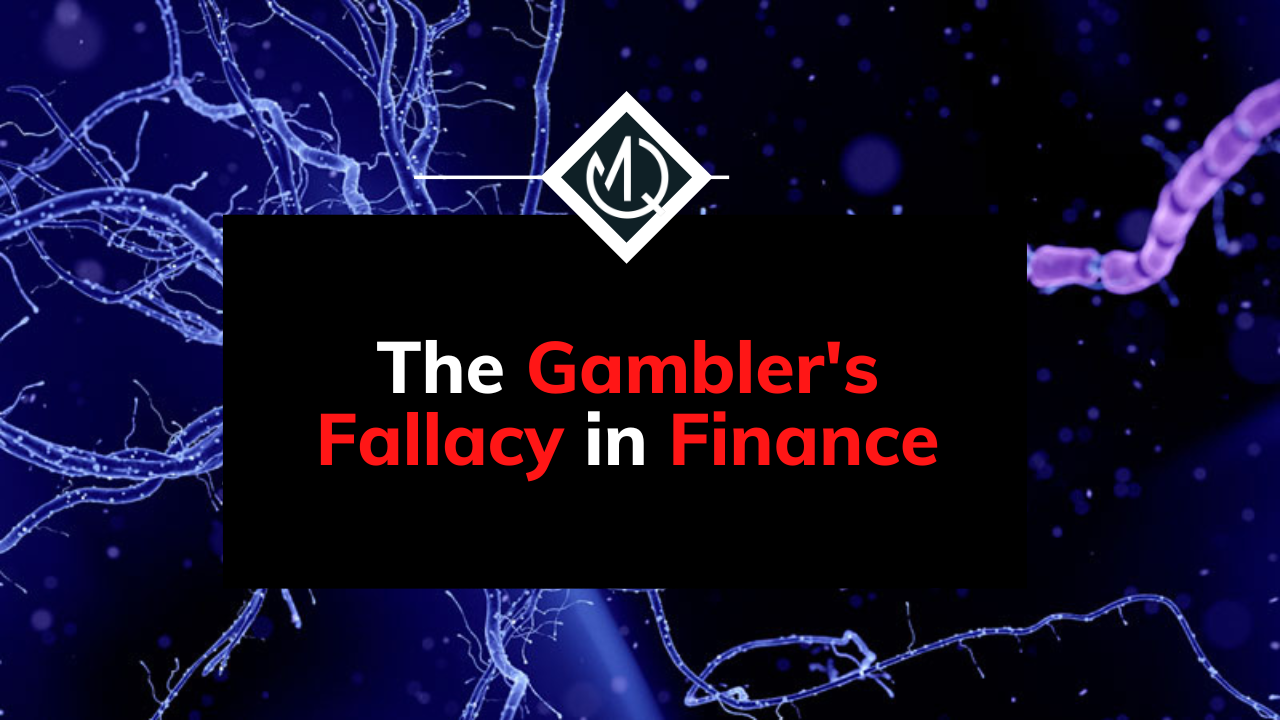 All About the Gambler’s Fallacy in Finance

When starting to invest, one of our biggest mistakes is making decisions without verifying them by means of statistical methods, which leads to false conclusions. This is because our brains are used to trying to identify patterns instead of interpreting statistics.

Therefore, this article will try to identify, define, detail, and exemplify one of the most common fallacies humans carry in the capital market: the gambler’s fallacy.

I’ll first start by defining this fallacy, both technically and via examples. Lastly, we’ll discuss why this fallacy is especially relevant in the financial industry.

The gambler’s fallacy is best understood through an example: imagine that we show a person how we flip a coin ten times, and by sheer luck, we get ten heads in a row. Before flipping the coin for the eleventh time, we ask the bettor about his opinion regarding the probability of heads occurring. If he falls victim to the gambler’s fallacy, he or she will assume that heads have a lower probability of occurrence than tails. The false reasoning behind this mistake is that, in order for the coin toss to “go back” to a 50-50 type of game, the next flips should be biased towards tails.

The previous example assumes that there is no uncertainty regarding the fairness of the coin. The bettor would be inclined to favor heads if suspicious about the game’s fairness.

Of course, we can anticipate that any answer that is not justified solely by chance is incorrect. The fact that this error has been given a name is evidence of our inclination to do it.

To recap, the gambler’s fallacy consists in believing that a completely random event is influenced by the results that occurred in the past in such a way that it reverts to the mean that one would expect from said process. In other words, it is the erroneous belief of giving a greater probability of occurrence to an event that recently happened less than statistically expected. When identifying this fallacy and even when trying to avoid it, we should keep the following aspects in mind:

How to avoid the gambler’s fallacy

The gambler’s fallacy arises from the cognitive bias of the law of small numbers. This is a completely wrong belief in which we try to detect patterns taken from only a few trials as if they were general laws. Therefore, in order not to fall into it, we must take refuge in the law of large numbers. This law contrasts events by taking larger sample sizes (tending to infinity). The more samples we have on an event, the smaller the margin of error between our estimated probabilities and the real probabilities of the phenomenon being studied.

For example, if we toss a coin ten times, one option will likely come up more times than the other. If we conclude from this small sample that this is the set of probabilities of the event, we would arrive at a completely wrong conclusion.

On the other hand, if we tossed the coin 1,000 times, we would get a number close to 500 heads and 500 tails. The probability of having exactly 500 of each is very small, but due to the law of large numbers, the probabilities would tend to be 50%.

I recommend the reader not to spend a whole day of his life flipping coins and instead look at the following convergence chart I made using MS Excel:

As can be seen, the series tends to stabilize at 50% as we keep adding more tosses to our sample.

The most common pitfalls related to random events* that lead us to fallacies and, consequently, that we should try to avoid are:

Also, when trying to spot this fallacy, we should always keep in mind that:

If we expect the next outcome of a random and independent event to be the opposite of those that happened in the immediate past, we are committing the gambler’s fallacy. On the other hand, when an outcome is expected to keep happening since it happened in the past, the Hot-Hands Fallacy is being incurred. Due to their similarity, we’ll try to differentiate them in the following section

*: Strictly speaking, we are referring to independent and identically distributed (i.i.d) processes, since there are processes with random components that can be autocorrelated with their past results.

The Gamblers Fallacy vs. the Hot-Hands Fallacy

The Hot-Hands fallacy is the (incorrect) assumption that if a given random and independent event occurs multiple times in the recent past, it is more likely to keep happening. Conversely, if this event has not happened as much as statistically expected, the Hot-Hands fallacy implies that it has a greater probability of not happening in the future.

In other words, it is the false belief that a random event that happened has happened more than expected in the past and will continue to happen disproportionally in the future. Momentum strategies that are not thoroughly tested are a common example of the Hot-Hands fallacy.

As we saw at the beginning of the article, the chances of winning a game of pure chance (like rolling the dice or flipping a coin) are random and independent. Therefore, they do not correlate with past results (no autocorrelation), and as we learned in mean reversion, in the long run, the results of such events tend to converge to their true probabilities of occurrence.

Another example of the Hot-Hands fallacy in the financial industry occurs when it is believed that an investor that was able to beat its benchmark during a given year will do so again in years to come. Unless we know or assume that he or she has extraordinary skills, the returns will converge to the market’s average returns (minus transaction costs).

The Gamblers Fallacy and Mean-Reversion Strategies

Mean reversion is the tendency of some processes to converge to their long-run average value. It is a widely studied phenomenon in the capital markets and is also one of the main assumptions behind various trading strategies.

In statistical terms, mean reversion can be understood from the following example:

Consider a room full of students who each complete a 100-question true/false quiz whose correct answers are completely random. Logically, the expected average score of said exam would be 50%. Also, it is expected that some students would obtain excellent grades while others would get poor scores.

If we take the student with the highest result and ask him to take the test again, it would be unreasonable to expect him to replicate her good result since this was purely due to chance. The more extreme an outcome of a random process, the less likely it is that it can be replicated. Our best guess would be to expect this student to obtain a 50% of correct answers, thus “reverting” its result to the expected mean.

A corollary of the example: If the student’s parents expected the student to replicate the initial high score, they would be guilty of Hot-Hands fallacy.

When it comes to capital markets, this concept is usually used in a slightly different way: the reversion to the mean of the price of an asset is usually based on the underlying information of the same (balance sheet, future expectations, etc.) and not on the randomness of the price. process.

For example, when a stock’s price is below its historical average price, it can be considered underpriced, while when said price is above average, it is considered overpriced.

In the next section, I’ll go over an oversimplified trading strategy that assumes a mean-reverting behavior of the underlying asset’s price.

Mean reversion in the Stock-Market

Before continuing with the example, I should state that the mean-reverting assumption is not necessaryly an example of the Gabmler’s Fallacy. Both mean-reversion and momentum are two studied phenomena of asset prices that contradict event the weak version of the Efficient Market Hypothesis. Having said that, mean-reversion requires rigorous testing and should not be automatically assumed as a given.

One of the most popular strategies when it comes to short-term trading is mean reversion. This method is based on the assumption that the asset will return to its moving average price after a strong deviation.

In the simplest example, we can design a strategy with two simple moving averages (SMA) and the Relative Strength Index:

In this example, we will use this method to see when it can give us a buy signal:

The Gamblers Fallacy and the Martingale Strategy

The Martingale strategy is a betting method in which if a bet is lost, the amount of the previous bet is doubled to recover the lost capital. After a favorable result, the initial amount is wagered again, and the process is repeated.

The main reasoning used in this “strategy” is none other than the gambler’s fallacy, based on the belief that “it is impossible to lose five, six, or seven times in a row.”

However, said bettor underestimates the probability of occurrence of a consecutive series of adverse events that result in the total loss of his capital.

Taking into account that capital is finite (limited), there is a maximum number of consecutive negative results that this “strategy” can tolerate. In addition, the following additional limitations are presented:

Let’s look at possible scenarios with losses at different times:

The percentage return drops sharply to 3.2% and increases the total risk to $3,100.

As can be seen in the previous example, the Martingale is an extremely poor idea and should be avoided at all costs. The popularity of this system is solely based on the poor understanding of rudimentary statistics. In short:

Who first described the gambler’s fallacy

The gambler’s fallacy was theorized by Amos Tversky and Daniel Kahneman. Amos and Daniel were two Israeli-born psychologists specializing in the psychology of decision-making.

In 1974, in the publication “Judgment under uncertainty: heuristics and biases” in the journal Science, they first related the gambler’s fallacy to a cognitive bias. Daniel Kahneman received the Nobel Prize in Economics in 2002. Amos Tversky would also have received it, but it was not so since the prize is only awarded in life, and Tversky died in 1996.

Examples of the Gambler’s Fallacy

In 2003, what would later become known as “the fever of ’53” occurred in Italy. The phenomenon began when in March of the current year, the number 53 in the lottery stopped coming out, and several gamblers began to realize this (incited by the same lottery company and the media) and fell into the gambler’s fallacy. Thinking that the number hadn’t come out for a long time, they assumed there was an increased probability of it appearing. 182 draws passed, and billions of euros were bet until, in February 2005, the number 53 appeared again in the lottery, but not before leaving hundreds of people bankrupt.

In 2005 in London, a study was conducted in which it was detected that goalkeepers could be committing the gambler’s fallacy in a sample of more than 400 penalty kicks. In soccer penalties, the goalkeepers must choose the side of the goal to cover before the kicker executes the penalty. Analyzing all the shots, it was concluded that the number of times the goalkeepers dived to the left or the right were similar, but when the kickers shot several times in the same direction, the goalkeepers were more likely to dive to the opposite side on the next shot.

In ancient times it was believed that a person with several male children had a greater chance that their next child would be female. Unless for some genetic predisposition, we know that the gender of a kid can be thought of as a truly random event. Therefore, the sex of the previous children is irrelevant when trying to forecast the gender of the new one.