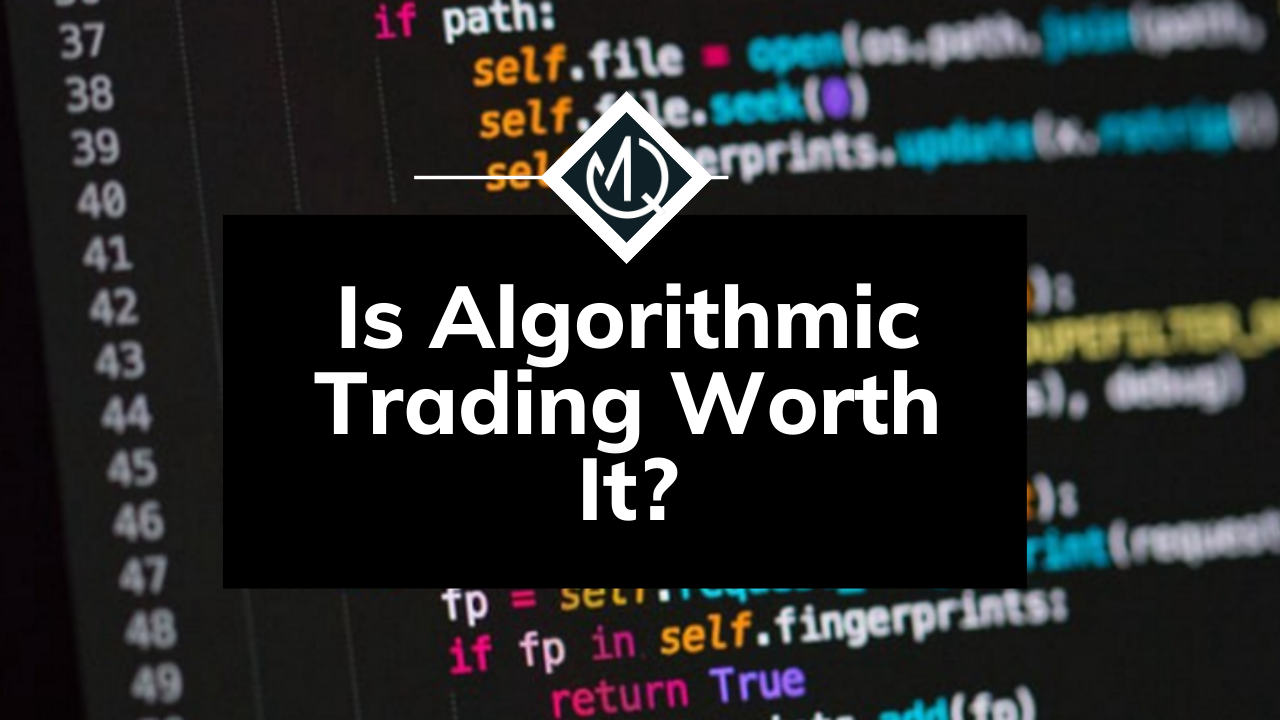 Is algorithmic trading worth it?

If you follow the news and trends of the finance industry in general and the financial markets in particular, you might have noticed an increased interest in algorithmic trading. Not only is it being implemented extensively in large proprietary firms, but also in the retail industry.

Algorithmic trading is superior to alternative trading methods because it can not only be automated but can also incorporate and process vast amounts of data that can otherwise not be used in regular trading. This, in addition to encouraging a scientific approach toward strategy design and live trading, increases the probability of developing profitable systems.

Algorithmic trading has proven to be incredibly profitable throughout the years. Rentech’s Medallion Fund is the most notable example, with a 72% average annualized returns between 1994 and 2014. The fund is conformed only by quantitative developers that don’t have any formal financial education, like mathematicians, physicists, computer scientists, and statisticians. In addition, they have petabytes of alternative data at their disposal.

On the other hand, it is difficult to estimate the profitability of algorithmic trading for retail investors. Since anyone could theoretically clone a GitHub repository with a poorly designed algorithm, the entry barrier to becoming a retail algorithm developer is almost nonexistent. The success rate for these traders will be small, if not close to zero.

Automated trading is by no means a magical solution for traders. Most strategies provide no real alpha, and it is very uncommon to develop a profitable strategy without previously extensively researching dozens of ideas and iterations.

The prospects for seasoned and well-rounded traders are better. Practitioners with a solid background in programming, mathematics, and statistics are able to develop strategies that consistently perform better than a suitable benchmark. To do so, it is not uncommon for them to find small statistical arbitrage opportunities that are too small and illiquid for large proprietary firms even to consider. Profitable traders also incorporate alternative datasets to find trading opportunities based on hidden and interesting correlations.

How effective is algorithmic trading?

Algorithmic trading is inherently more effective than discretionary trading in almost any dimension worth analyzing. It not only consistently outperforms compared to manual trading, but it also has lower execution costs. In contrast to pattern day-trading, automated trading strategies can also process vast amounts of data points per second.

We will go through the main features that make automated trading a more effective approach. But before doing so, it is important to remember that a high failure rate prevails in financial markets, regardless of whether strategies are systematic or discretionary. Only the most novel, creative, and innovative strategies can perform better than random ones in a consistent way.

Given that all trading algorithms can be reduced to a finite set of rules, they can be backtested. In contrast to discretionary trading, where “intuition” or “gut feeling” cannot be formally described, systematic strategies can be historically tested across any number of assets, market regimes, and periods.

In other words, systematic trading can be tested using the scientific method via statistical tools. This increased technical rigor reduces the risk of trading strategies whose performance is only a byproduct of chance.

Backtesting also allows to stress-test some misconceptions or beliefs held by pattern day traders. You only need to iterate over a handful of strategies and a few hundred assets and periods to conclude that the most commonly held ideas regarding day trading, visual pattern recognition, and charting have little to no empirical validity.

The cost of executing automated strategies is many orders of magnitude smaller when compared to discretionary trading. This is because automated systematic strategies do not require a human to make decisions and execute orders.

Discretionary trading either requires paying a salary to someone or the implied opportunity cost of foregoing your own salary to trade. Meanwhile, the cost of renting a server has gone down in the last decade. Simple automated strategies can run on cheap commoditized servers that generally will set you back roughly 5 to 20 dollars per month. DigitalOcean, Heroku, Linode, GoogleCloud, and AmazonWebServices, are only a few of the most common options available.

Requirements for becoming an algorithmic trader

An algorithmic strategy developer has to master skills from a broad range of fields. In addition to being good coders, they usually need to have a solid background in elementary mathematics and statistics. Technical people with a high capability for reducing complex ideas into high-level abstractions and simpler models tend to be more successful than people with lots of experience in trading using charts and technical analysis. You can read our article about the mathematical skills required here.

It might seem like a dry and dull endeavor at first glance, but creativity is also essential to developing a profitable strategy. Some traders find uncommon methods to estimate an important financial or economic variable before it is announced by finding a variable that is highly correlated and known ex-ante (beforehand).

The required skills for getting hired in the industry are vastly higher. It is required to have a solid academic background in linear algebra, differential calculus, probability, and statistics, in addition to being a proficient programmer. STEM degrees like mathematics, computer science, statistics, and electrical engineering are popular within the industry.

Economists and other careers with a strong focus on mathematical modeling are also sought but to a smaller extent and subject to having a solid understanding of econometrics or operations research.

How much do algorithmic traders make?

Algorithmic traders in the United States have an average yearly income of $120,500. The estimated income also depends on the city: whereas New York has an average of $150,000, it is only $65,000 in Memphis.

The average income tends to be substantially higher when compared to other major financial hubs. For example, the average base salary in London (UK) is $82,000.

The skills required for algorithmic and manual trading are very different. Whereas discretionary trading requires mental toughness, adaptability, and discipline, algorithmic trading benefits much more from programming, mathematical and statistical skills. So, it is no surprise that the latter has a relatively steeper learning curve.

Systematic trading tends to attract a more scientifically minded audience, which in turn fosters better research and idea generation and eventually leads to higher probabilities of success compared to discretionary trading. This could be backed by the fact that, in recent years, most hedge funds and proprietary firms have adopted, at least to a great extent. You can further read about the differences in this article.

As we can see, algorithmic trading is no magic solution to successful trading performance. The profitability of a strategy depends on the rules themselves and not on whether the trades are automated or manually placed.

Having said that, systematic trading has plenty of advantages over discretionary strategies since it enables a scientific approach to trading. It allows for backtesting, which increases the number of (hypothetical) trades available to do significance tests, and inferential analysis, in addition to improving the reliability of the most popular metrics used to measure a strategy.