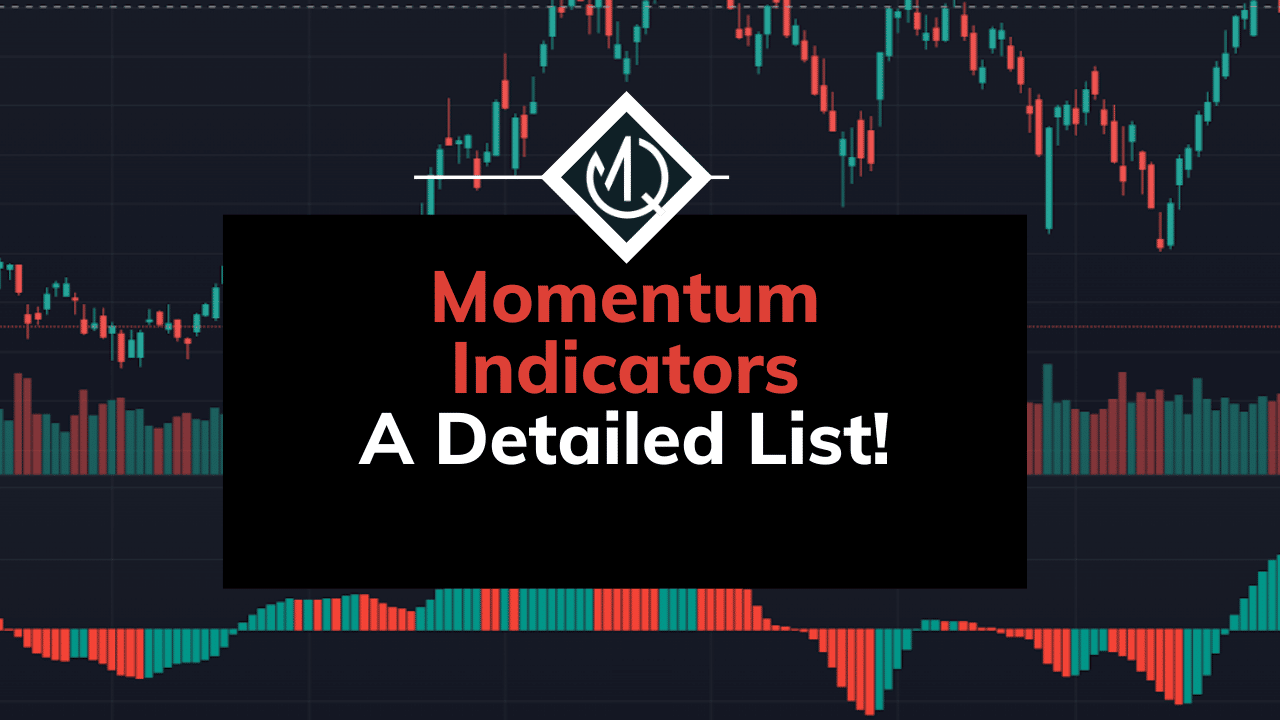 If you’ve ever come across an article describing a trading strategy that is supposed to be infallible, you’ve probably heard about momentum indicators. Although said article probably showed an overfitted backtest instead of a real P&L, momentum indicators are worth considering.

In this article, I’ll cover the most popular technical indicators used for spotting momentum signals. I’ll also provide a list of momentum indicators that I hope is close to being exhaustive.

Although any lookback periods can be used, traders tend to set the short SMA to 5 days and the long SMA to 34. Additionally, instead of using the closing price, the moving averages are calculated by using the median price in order to better account for volatility.

The Awesome Oscillator was developed by Bill Williams, an American stock trader also known for developing the Market Facilitation Index.

Thus, the MACD requires three parameters and is usually referred to as MACD(a,b,c), where:

The momentum indicator (MOM) is arguably the simplest indicator on this list and calling it an indicator could be a bit of a stretch. In a nutshell, it is the difference between the current price and the closing price of a given number of periods back. In other words, it can be expressed as follows.

As with any trend-following momentum indicator, MOM tries to exploit the fact that price series oftentimes are not completely uncorrelated with respect to themselves (autocorrelation).

This indicator should never be used as the only signal of a strategy. Instead, despite its simplicity, it is often useful as an additional verification of momentum before an entry.

The Rate of Change (RoC) is an indicator that measures the relative magnitude at which a price changes over a given period of time. It can be calculated by computing the ratio between the price of a given period divided by the price of the previous period.

As expected, values greater than 1 are the result of an increase in price, whereas values lower than 1 indicate a decrease in price. Additionally, a RoC of exactly 1 means that the price did not change during the covered period.

The indicator and its use are rather straightforward: a value greater (lower) than 1 indicates positive (negative) momentum. Although simple in nature, this indicator is one of the most widely used due to its simplicity.

The Relative Strenght Index, or RSI, is a momentum indicator that oscillates between the values of 0 and 100. According to its developer, Welles Wilder, values above 70 mean that the asset is overbought, whereas values below 30 mean that it is oversold.

Since its first publication in the book New Concepts in Technical Trading Systems (1978), the RSI has become one of the most popular indicators.

This, and most of the remaining popular indicators, require very simple calculations since they were developed previous to the popularization of computers in the financial industry. Thus, computations had to be kept to the bare minimum in order to allow traders to calculate them.

In order to calculate the RSI, we first start by considering a given number of bars (14 is a common value used). For each period, we calculate the difference in price with regard to the previous one, and separate depending on whether they are upward (U) or downward (D).

After doing so, we proceed to calculate the average for both upward and downward changes individually. It is a common practice to use use the simple moving average (SMA) or the exponentially weighted moving average (EWMA).

The SMA is the average that we all know and consists in adding all values and dividing them by the number of values. On the other hand, the EWMA assigns greater weights to the most recent values and exponentially decreases weights to older values. Thus, the EWMA reacts faster to recent movements in comparison to the SMA.

Regardless of which moving average we choose to use, we proceed to calculate the relative strength (RS), which is the ratio of the average uptrends dividend by the average downtrends.

Now, the only step left is to calculate the Relative Strength Index, as follows:

By looking at the formula, we can intuitively see that:

A sequence of relatively strong positive price changes results in a higher Relative Strength Index. According to the intuition behind this indicator, this could be interpreted as evidence of positive momentum.

The slope is a popular momentum indicator that is calculated in the same way as the usual definition of slope. In other words, it is none other than the rise over the run. The formula is stated as follows:

The interpretation of the indicator is as simple as it gets: a positive value (slope) indicates a positive momentum signal, whereas a negative slope indicates a negative momentum signal. As could be expected, this indicator is too simple and weak to yield strong signals by itself and is usually used simultaneously with other momentum indicators in order to increase the strength of the signal (at least, in theory).

Although the most common definition of the slope indicator is the one given above, some traders also calculate it by means of regression. Given a series of prices, linear regression will lead to a straight line that minimizes the sum of the squared distance between each price and the line. Although the calculations of linear regression can be cumbersome to do manually, all data tools worth its salt can calculate it automatically.

Most often than not, the sign of the slope will be the same regardless of the definition you choose to use. But this is not always the case, and the following graph shows a situation in which the two approaches don’t align:

The dotted line in the chart represents the linear regression that best fits the price series of a random asset. As you can see, the resulting slope is positive. On the other hand, if we use the most popular definition, we’ll arrive at a slope of exactly 0, given that the initial and the most recent price equals 100. Thus, [100 – 100] / 5 = 0.

Having stated this important distinction between both approaches, the spirit behind them is the same: a positive change is expected to be followed by a subsequent positive change. In other words, they are both valid momentum indicators.

In a nutshell, this indicator tries to predict the direction of the price based on the previous closing price relative to the price range of a given timeframe (usually 5 periods).

In order to calculate the SO, we’ll use a timeframe of 5 periods as an example:

Furthermore, we calculate a moving average of %K and refer to it as %D:

Although different sources interpret this indicator in multiple ways, we can find some common ground amongst them. The %K oscillator being above some threshold value (80 being a common one) is a common bullish momentum signal. Additionally, the %K crossing the %D indicator from below is also interpreted as a positive momentum signal. More often than not, traders use both signals in conjunction.

The Stochastic RSI can be thought of as a blend between the Stochastic Oscillator and the Relative Strength Index. It consists of comparing the current value of the relative strength index with respect to the lowest and highest values of the same indicator over a given number of periods (usually 14).

You can refer to the section regarding the RSI in order to follow the steps required for its calculation. In the current section, we will assume that we already have calculated them. As a sidenote, the RSI is bounded to values between 0 and 100.

We can intuitively interpret the Stochastic RSI as follows:

Following the spirit of other momentum indicators, values over a certain threshold indicate a positive momentum signal. Most often than not, 14 periods are contemplated, and a value of 80 (20) is set as the threshold for positive (negative) momentum.

Having covered the most important and popular momentum indicators, it is worth saying that there are countless additional ones that you might consider checking out. I chose not to cover each and every single one in detail in order to keep this article short. Also, most of the indicators in the following list are very similar to at least one of the indicators described.

Having said that, this is a list of additional momentum indicators worth checking out:

Having said that, an asset that features some sort of momentum characteristics on a minute basis might feature mean-reverting properties on an hourly time frame. Even so, the effect is not always strong enough to cover transaction costs. Thus, momentum is not a one-size-fits-all feature that will inevitably lead to profitability.

As can be seen in the previous section, most momentum indicators are extremely simple to compute and understand due to the fact that they were developed in a pre-computer era. It is probably unreasonable to just use the MOM indicator and expect to perform above a suitable benchmark in today’s market, characterized by quantitative techniques and machine learning models.

Having said that, the value of momentum as a feature should not be underestimated, and most professional quants do properly account for it when researching new strategies.

Which is the most popular momentum indicator?

We should keep in mind that higher popularity is definitely uncorrelated to higher expected profitability. Most probably, the popularity of most indicators relies on their ease of use and not their usefulness.