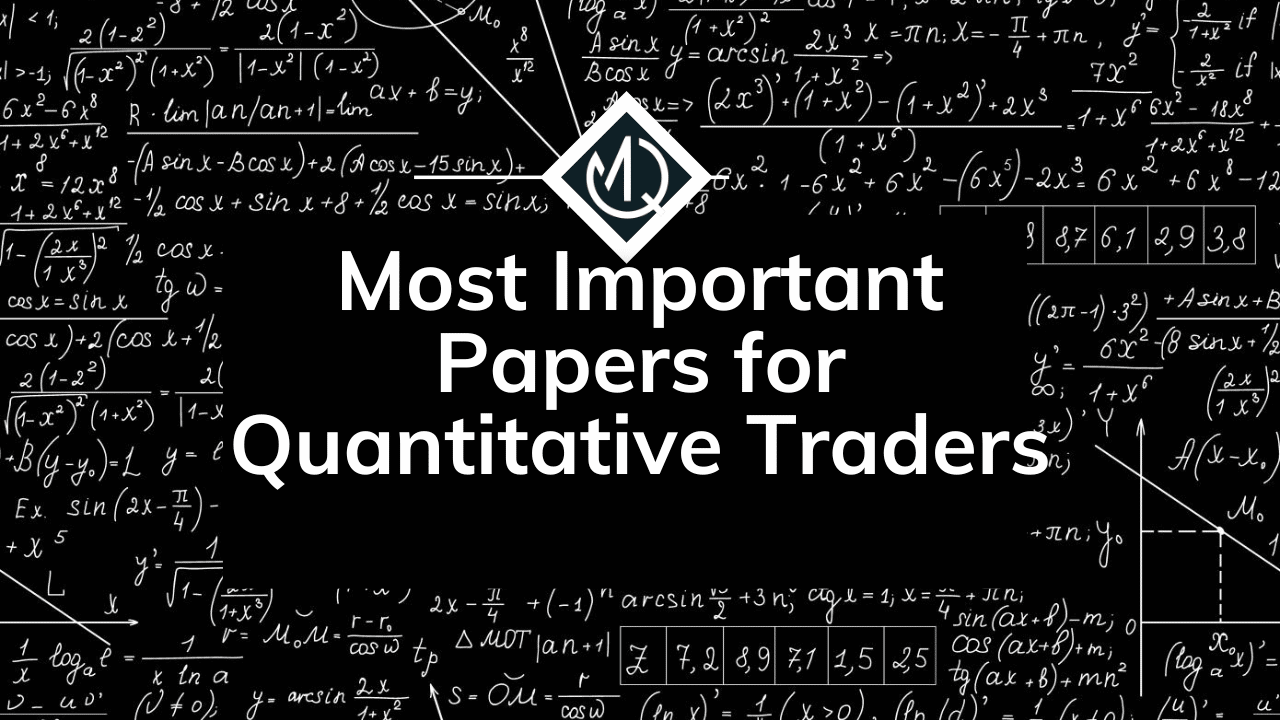 Most Important Papers for Quantitative Traders

Over the years, there have been numerous researchers, including several Nobel Prize winners in economics, who have devoted themselves to the study of the field of quantitative finance and trading. We believe that, without them, finance today would not be as we know it, and therefore, in this article, we will describe some of the many papers that had a profound impact on financial markets.

Whenever possible, I provide the link to the paper instead of the Journal where it was published. Due to obvious reasons, I cannot provide such links in cases where a paywall is in place. Having said that, let’s get started!

Robert Almgren was one of the pioneers and had a direct impact on the nature of the first implementations of automated orders via algorithms. This paper is definitely a must-read piece of academic literature for every quantitative developer in charge of refining trade execution algorithms. The authors formalize a method of executing and measuring trade execution performance by minimizing a combination of transaction costs and volatility risk.

An order execution algorithm splits large orders into smaller ones with the objective of reducing market impact. By doing so, a trade-off between exposure to risk and market impact arises, and this paper is the first one that tries to solve this problem.

In a nutshell, the authors indicate that the share price varies for two reasons

To minimize endogenous price changes, which are the only ones under our control, Almgren suggests the use of execution algorithms. He presents a rigorous yet practical approach to measuring and implementing algorithms.

This paper is definitely a must-read for any quantitative developer in charge of optimizing the execution of portfolio rebalancing routines, among other strategies that don’t require immediate execution.

Written by Robert Pindyck, the paper show that the prices of raw materials vary according to a trend in the form of a convex quadratic function.

Gas, coal, and oil were analyzed for the time period spanning from 1916 to 1996, and the author concludes by stating that the trend of oil has changes that are tied to the marginal costs of the extraction of the raw material and the available estimated reserves of said resource. For natural gas and coal, the tests carried out indicated that they are inconclusive.
It should be noted that these findings can only be applied to non-renewable energies since renewable ones are unable to accumulate significant reserves.

The paper presents a closed-form formula for valuing spot assets modeling its variance with a Generalized AutoRegressive Conditional Heteroskedasticity (GARCH) model.
Due to its sophistication and usefulness, GARCH models gained popularity for estimating volatilities during the 1990s, and the financial industry adopted them aggressively.
The reasons behind incorporating GARCH models as a means of estimating volatilities in the stock market can be summarized as follows:

This paper proved to be incredibly popular in the financial markets industry since it allowed practitioners to value option prices with higher accuracy.

Published by Harry Markowitz in the Journal of Finance, this paper lead to him winning the 1990 Nobel Prize winner in economics. The paper revolutionized the way in which professionals invest by formally introducing the concept of diversification. Markovitz showed that for a given expected return, there exists an optimal portfolio that minimizes the risk. Conversely, for a given level of risk, there exists a portfolio that maximizes the expected return.

In other words, the paper extended the common risk-return tradeoff by incorporating the correlations between them into the calculations.

The intuition behind his formal framework is very simple. For example, since most cryptocurrencies have an extremely high correlation with respect to Bitcoin, holding lots of different cryptocurrencies does not greatly reduce the overall risk of the portfolio. On the other hand, investing in a handful of assets and commodities from different industries does reduce the total risk to a greater extent.

This paper is the formal presentation of the nowadays famous Kelly Criterion. This model is extensively used in casino games in particular and in risk management in general. The author derives a formula that determines the optimal size of an allocation in order to maximize wealth growth over time.

The formula is extensively used in quantitative finance since it is a useful technique for maximizing the natural logarithm of wealth (or the expected geometric growth rate).

Capital Asset Prices: A Theory of Market Equilibrium under Conditions of Risk (Sharpe, 1964)

The famous Capital Asset Pricing Model (CAPM) is a model developed by William Sharpe and John Lintner and published in 1964. Based on the aforementioned work published by Harry Markowitz (1952), it is used to calculate the return that can be expected when investing in a financial asset, according to the risk that it entails.

By assuming that all investors possess the same information, receive it at the same time and process it in the same way, the CAPM demonstrates how there is only one efficient portfolio, called the “market portfolio”. In contrast to Markovitz (1952), the CAPM concludes that the only way to choose the risk-return profile of a portfolio is by holding the market portfolio and a risk-free asset (T-Bill‘s).
The paper introduces the famous and popular notion of Beta, which is the most popular measure of the volatility of the returns of an asset with respect to the overall market.

The CAPM is based on the following assumptions:

Much like in the work of Almgren & Chris (2000), this paper deals with optimal trading execution. The author further refines the work done in the field by incorporating a Markovian signal in the optimal trading framework and derives an optimal trading strategy for the special case of assets following a stochastic process with drift (Ornstein-Uhlenbeck process).

This paper is the seminal work that presents the very popular “Efficient Market Hypothesis” concept for the first time. The author presents a theory of information and market efficiency and theorizes that asset prices already accurately contain all the relevant information available.

By assuming that this is true, the author concludes that prices follow a stochastic random process called “random walk“, yielding it impossible to predict the future price of assets.

The Pricing of Options and Corporate Liabilities (Black & Scholes, 1973)

You might recognize the authors’ names, and for good reason: this paper presents the Black-Scholes model for pricing options. Published in 1973, it utilized the physics heat transfer equation as a starting point to estimate the price of an option. It is also the model used for calculating the implied volatility of an asset.

Further refinements and extensions have been developed since its publication, mostly by relaxing one of the assumptions required for the closed-form solution of the model. Thanks to the model using partial differential equations to model the price, numerical methods can be used whenever a closed-form solution is not achievable.

Contrary to the common assumption of the efficient market hypothesis widely used in the academic literature, Bondt & Thaler showed that there is statistically significant evidence showing the contrary. By showing that, in violation of Bayes’ rule, investors tend to overreact to unexpected news events, they discovered substantial weak-form inefficiencies. Thus, historical price information is not correctly priced by the market.

If you’re interested in diving into the fascinating field of behavioral finance, this paper is an excellent resource to get you started.

In this article, I tried to provide an extensive, yet by no means exhaustive, list of papers that any quantitative person interested in the stock market should be familiar with. Some of them do not need any previous formal education, whereas others do require some mathematical maturity due to their very theoretical approach.

Also, as you might have noticed, these papers cover a broad range of topics, and are only one of the most resources in each field of study. It goes without saying that any type of specialization in one of these topics requires further research.