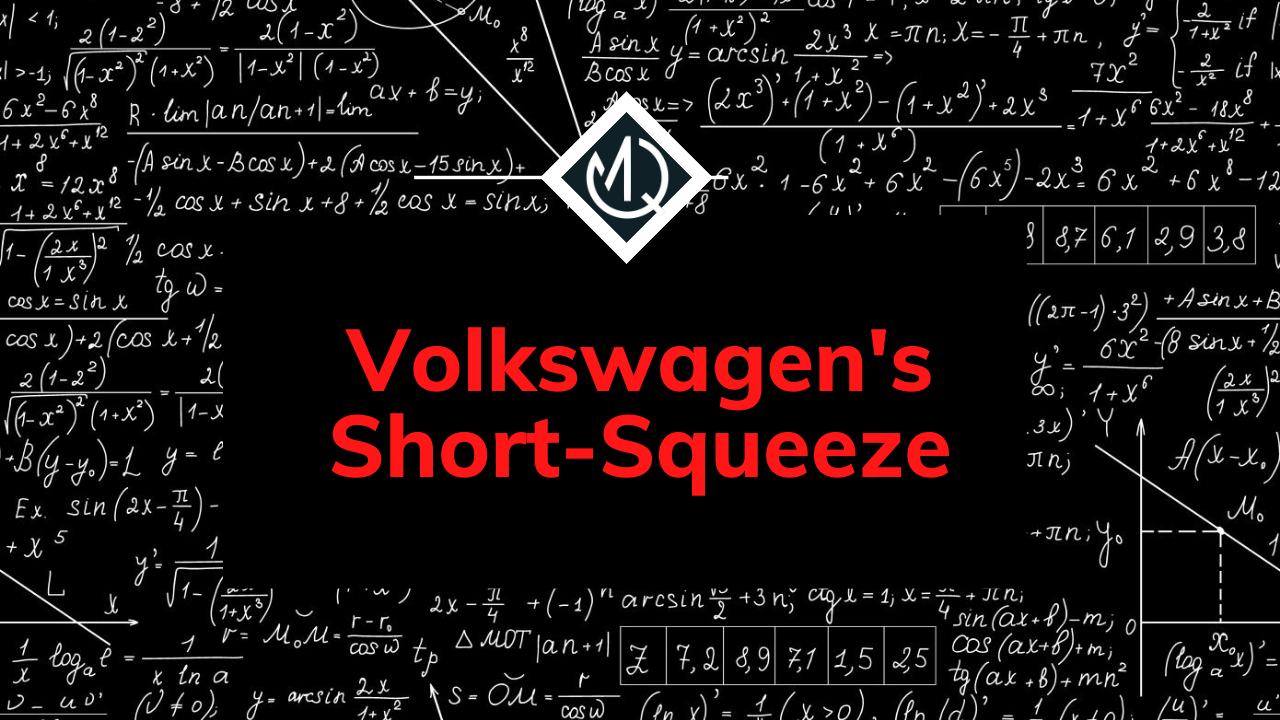 As we all probably know, the year 2008 stood out for being a year full of important events that went down in the history of the financial markets. Although surely not as remembered as the sub-prime crisis, Volkswagen’s Short-Squeeze is still remembered as one of the most important and interesting Short-Squeezes ever. In this article, I will try to cover the events and concepts necessary to successfully understand what occurred during the Volkswagen Short-Squeeze and why it was so important.

In order to understand what happened during Volkswagen’s Short-Squeeze, we first have to understand two important concepts: short-selling and short-squeezes.

Short-Selling is an operation in which a loan of shares is requested from a third party (generally a broker) in order to be able to sell them, and later repurchase them at future date at a lower price than the one at which the operation began.

When selling an asset that we borrowed, an open position will be generated that at some point we must close.

It can be used as a method of speculation for assets that we believe will drop in price. Additionally, short-selling can also be used as a hedging method for our portfolio by shorting a share that we hold by a certain percentage.

To start short selling, the counterparty will charge us interest while the position is open and will require us to leave certain guarantees, which can be liquid balance or other assets. This guarantee is called Margin.

Let’s imagine that we decide to short a stock that is currently trading at $100.43. Once the short position is initiated there are two possible scenarios:

When choosing our short-selling strategy, it is vital to highlight two important factors:

What is a Short-Squeeze?

As we mentioned in the first section, once we want to close our position we must repurchase the asset. But let’s imagine that before we decide to do so, an unexpected event occurs in the market, be it a good quarterly balance sheet presentation or some news that has a positive impact on the asset. This will make our vision of the asset change, so we might be inclined to repurchase the stock to limit our potential losses. But what would happen if we are not the only short sellers who want to close their position on the asset?

This can create a bottleneck of people buying back the asset, leading to the market having three different types of demands on the stock:

The short-squeeze is a buying run on the asset at any price in order to close the short position.

The short-squeeze is a buying run on the asset at any price in order to close the short position.

In order to detect them we must know how to calculate and the meaning of few additional fundamental concepts:

All markets usually publish this information once a month, but NASDAQ publishes it fortnightly on its website www.nasdaqtrader.com.

An important factor to take into account that increases the chances of a short-squeeze is a low share of floating stocks. Stocks with a low share float are much more volatile.

With these concepts covered, we can finally proceed to detail the 2008 Volkswagen Short-Squeeze!

In 2008, one of the biggest short-squeezes in history took place, in which Volkswagen’s stock increased from $210 to its historical maximum of $1,070 in a matter of days and, at a given time, was the most valuable company in the world.

A key factor leading to the short-squeeze was due to Porsche. The automotive company Porsche was interested in acquiring Volkswagen and was therefore buying its shares in large batches since 2005. As a consequence, as of that year, Volkswagen’s share price began an upward trend.

From this, three different types of short-sellers on Volkswagen participated in the market:

Although on certain occasions regulators temporarily restrict the possibility of shorting assets in order to prevent short-squeezes from being generated, these are legal as long as market manipulation practices are not incurred. In addition, the possibility of being able to short generates important benefits for markets in general:

What are other famous Short-Squeezes?

Since 2020, the founder of Chewy ($CHWY) Ryan Cohen was interested in the GameStop company. He believed that it could change its business model, with lead to him making partial purchases with the aim of being able to acquire it.

The market had a bearish view of GameStop due to coronavirus (among other causes), given that the company’s business model was to sell physical games. Thus, GameStop became the most shorted stock in the market.

By identifying these fundamental facts and what we learned in the last section, we understand that we are in the presence of the ideal conditions that lead to a short-squeeze.

On January 9, 2021, the short-squeeze began in which the price increased more than 800% in a matter of 5 days, going from $48 to a maximum of $434, causing hedge funds such as Melvin Capital to go bankrupt.