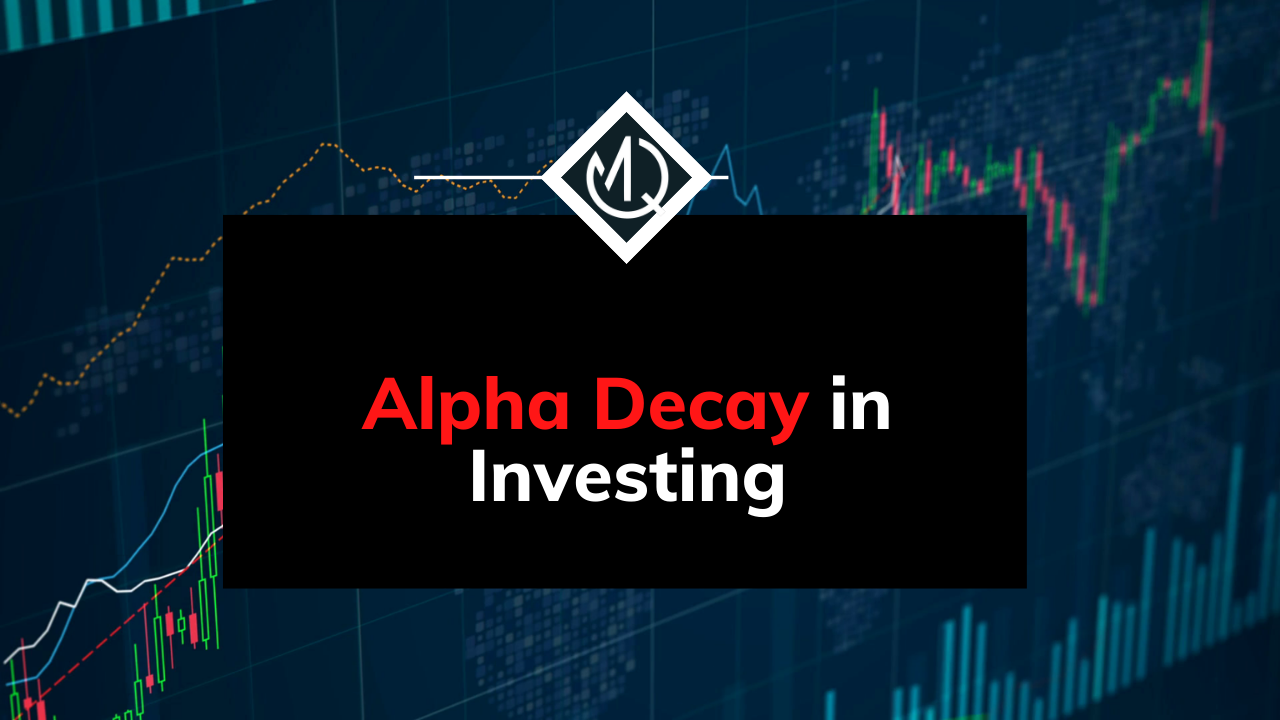 What is Alpha Decay in Investing?

Most experienced traders who have ever come up with a profitable strategy have eventually also seen firsthand how said strategy gradually lost its edge. On the other side of the spectrum, newcomers to the industry might have heard the term “alpha decay” mentioned on multiple forums or articles but never really understood what it means and how relevant it is.

So, if you want to know the short definition of Alpha Decay, it could be summarized as follows:

Alpha Decay is commonly referred to as the loss of a trading strategy’s predictive power (accuracy) over time. As a consequence, the profitability of a strategy tends to decrease gradually. Given enough time, the strategy converges to having no superior predictive power and risk-adjusted returns when compared to a suitable benchmark.

For the remaining of the article, I will go into further detail regarding this concept and relate it to other relevant ones.

To describe the concept of Alpha Decay in more detail, we should first go ahead and define what ” Alpha ” means in the financial industry.

Alpha is a measure used to describe the performance that an active portfolio or a strategy has compared to a suitable benchmark. If we assume the SPY to be an appropriate benchmark for a given strategy, an alpha of 1% means that our strategy outperformed the SPY by 1% over the same period. For 2021 this would have indicated that our strategy yielded an annualized return of 29.59%, given that the SPY increased by “only” 28.59%.

More technically, Alpha is the additional return over the expected Beta adjusted return of the market. To be exhaustive with our definitions, Beta measures the correlation of an individual asset (in our case, a strategy) with regard to the overall market.

Having covered these definitions, we can have a more rigorous understanding of Alpha Decay.

As previously mentioned, Alpha Decay refers to the decrease in abnormal returns of a systematic strategy with regard to a suitable benchmark. In other words, it describes the phenomena of a strategy gradually losing its edge over the market, eventually losing all of its prediction power.

The following graph displays a clear yet hypothetical case of alpha decay in a trading strategy.

The previous graph shows the cumulative returns of a strategy (orange) and its respective benchmark (blue). As can be seen, the strategy at first displays abnormal daily returns, increasing the gap between both series. Then, right around October 2021, the overperformance of the strategy seems to disappear, and the cumulative returns oscillate in a random fashion. In this case, the decay was not of a gradual manner but of a sudden nature. This could be due to a sudden change in the market regime, where some characteristics that led to the strategy’s performance suddenly disappeared.

Broadly speaking, three reasons can lead to Alpha Decay in a trading strategy:

How to calculate alpha decay

Given that the definition of Alpha Decay in trading is not a strict mathematical formulation, there are multiple ways of measuring it. This varies broadly depending on the trading frequency of a strategy. It is easier to measure alpha decay when it comes to higher frequency trading strategies due to having a bigger sample size at our disposal.

On the contrary, Alpha Decay is not easily measured in active portfolio management, where fewer trades are placed over a given time period. As a consequence of having a smaller sample size, the statistical estimation errors increase up to the point where not much can be said about the existence or not of Alpha Decay.

Having said that, one common approach consists of splitting the time series of returns into two adjacent periods and doing a t-test on the difference of the means. A strategy will have statistically significant Alpha Decay whenever the most recent period features lower returns than the remaining one.

When dealing with high-frequency trading, we can even split the series into more datasets and test them to measure the gradual decrease in alpha decay.

Measuring the precise degree of decay would be almost impossible to do for mid and low-frequency trading strategies. Measuring the degree instead of just the existence of decay depends on the sample size.

Alpha Decay vs. Overfitting in Backtesting

It is worth mentioning that oftentimes overfitting a strategy in a backtesting environment gets confused with Alpha Decay. Overfitting a strategy is an error that consists in designing a set of rules that perfectly describes the past behavior of an asset but completely fails to do so. It is a borrowed term from statistics and is best understood visually in the following image:

The leftmost plot is a function that is forced to perfectly represent the available sample. The problem with creating such a function is that its incredible performance won’t be maintained with new data. In other words, the set of rules created perfectly explains the noise in the data but fails to find consistent patterns.

One of the most common mistakes that inexperienced strategy researchers make is to create a set of rules and tweak its parameters until arriving at the best possible result. After doing so, the strategy is shipped to a live trading environment only to completely fail at replicating its past performance. Researchers that are familiar with the concept of overfitting quickly realize the mistake, whereas other folks think that the strategy features alpha decay and requires further tweaking or new ad hoc rules.

Can Alpha Decay be avoided?

The short answer is no: alpha decay cannot be avoided. Having said that, most strategies are subject to subsequent improvements that can mitigate the effect of the decay over time. In order to do so, it is of the utmost importance to constantly monitor a strategy and perform statistical analysis regarding its performance.

Given the urgency of developing and deploying an algorithm after finding an inefficiency, the first iteration has a tendency not to be the most refined version possible. Due to this, whenever quant developers start noticing lower abnormal returns, they might investigate the causes of it and come up with a further addition or modification of the behavior.