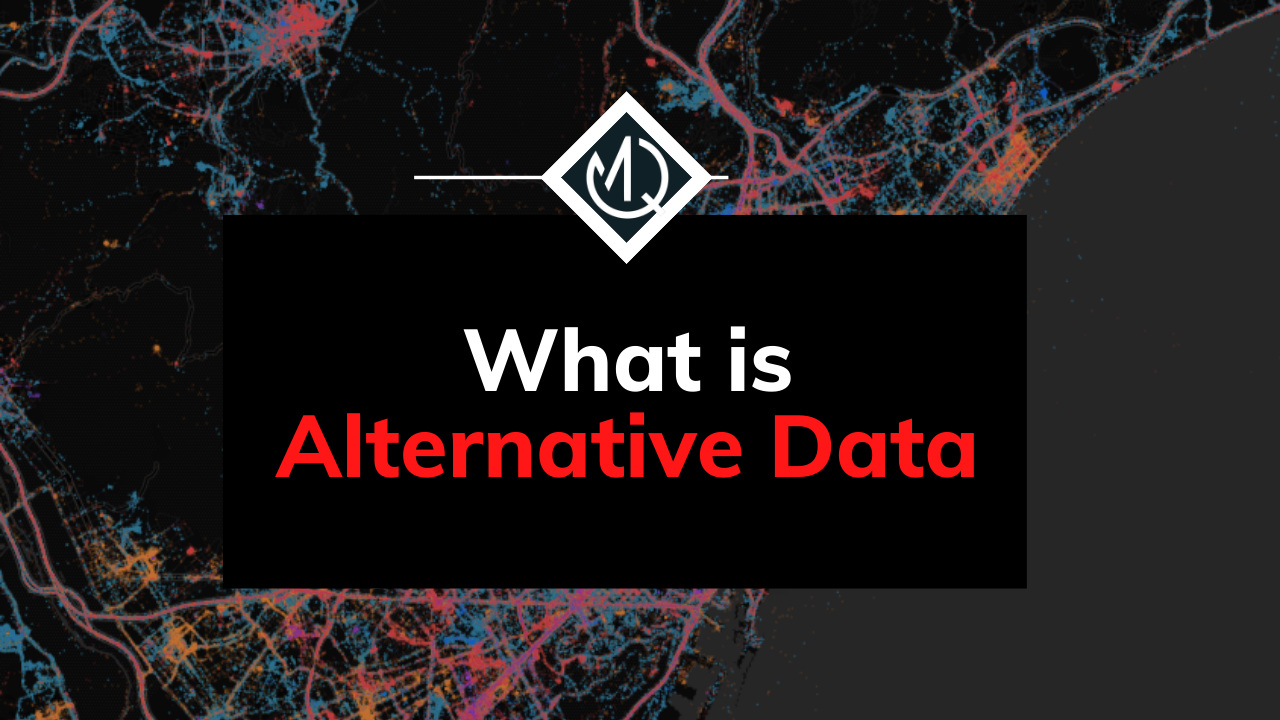 What is Alternative Data? With detailed examples

Although the term alternative data or “alt-data” has been used in hedge funds and proprietary firms for quite some time, there has been a spike in interest by retail investors in recent years. Nowadays, having reliable and novel sources of alternative data has become a major concern of almost all professional market participants.

In this article, I’ll cover the main aspects of alternative data, and its usefulness for algorithmic trading, in addition to covering a broad list of use cases that researchers have implemented in the past.

What is alternative data in finance?

Alternative data is an umbrella term frequently used to describe datasets that are not traditional in nature, and used for the purpose of estimating the future price change of an asset or the performance of a company. Examples are geolocation data, satellite images, credit card transactions, and website usage metrics, among many others.

Alternative data has gained popularity in the last decade thanks to the decrease in costs of processing power and the overall increase in the rate that data gets created. Nowadays, almost all relevant participants in the quantitative finance industry have incorporated some type of alternative data.

Given the fierce competition, there’s is little value to be extracted from traditional data sources, such as historical price series or balance sheets, and proprietary firms have to creatively develop new sources of alpha in order to stay relevant.

Examples of alternative data in finance

Given the fact that “alternative data” is an umbrella term used for nontraditional data, there are countless types of alternative data. Hedge funds are known to have used mobile geolocation, credit card transactions, website usage metrics, AppStore downloads, satellite images, social media sentiment, GitHub activity, flight tracking, among other types of data in order to anticipate price changes in the stock market and predict the future performance of companies.

In the following section, I’ll discuss each of these data types in more detail, in addition to describing its common use cases.

Mobile geolocation data is commonly used as a proxy for the number of people visiting physical retail stores. This is useful not only to estimate a company’s revenue before its release but also as a major explanatory variable for pairs trading strategies.

If properly sampled, the data can be extrapolated to all the retail stores of a given company and become an excellent estimator of the total number of people that potentially purchased a product or service from the company. Of course, in order to arrive at a final revenue projection, researchers have to also estimate the percentage of visitors who make a purchase, in addition to estimating the average purchase value.

Website usage data is not only useful for estimating the performance of companies that have online stores but also for estimating user growth of SaSS products. For example, it is common practice to use this alternative data to create statistical arbitrage strategies with streaming companies. In order to yield more reliable forecasts, researchers also follow the number of installations that each service has on different app stores, like Rokku Channels, Google Play, or Apple App Store.

SimilarWeb and Ahrefs are popular providers of website usage statistics.

Credit card transaction data is one of the most reliable data sources for estimating the average purchase value of a company’s client. Financial market participants use this data to forecast revenue figures before they are disclosed.

When mixed with geolocation data, researchers are able to estimate with astounding precision the number of potential clients visiting retail stores and their average purchase value. Having said that, they still have to make an assumption regarding the percentage of visitors that become buyers.

Due to the difficulty of having access to this type of data, in addition to cleaning and organizing the raw transactions in order to extract value from them, most hedge funds resort to paying subscriptions to one of the multiple data vendors available.

This type of data has gained huge popularity in recent years thanks to the advances in machine learning and the increase in processing power of todays GPU’s. During the 90’s and the early 2000’s, satellite images could only be used for trading purposes by companies with vasts amounts of resources at their disposal.

If you’re interested in this type of data, check out OneAtlas by Airbus, whis is a reliable and well known source used in the hedge fund industry.

Social media platforms are scraped by many proprietary firms in order to estimate the sentiment towards companies, cryptocurrencies, and even commodities. As is the case with most alternative data sources, social media can be used in many ways:

Flight data has been used to anticipate acquisitions made by the world’s most famous investor, Warren Buffet. Given the fact that said billionaire resides in a city with only 500,000 inhabitants (Omaha, NE), it was very likely that most private jets landing at the city’s airport were somehow related to a meeting with Mr. Buffet. By finding out who the passengers of the plane were before the deals became publicly known, hedge funds could react in anticipation of the news becoming public.

Since most cryptocurrencies are open source and use Github as its version control system, proprietary firms can keep track of the activity in a project. The most common metrics used to estimate a project’s activity and growth are the number of collaborators, commits (changes) and stars (similar to an upvote or like).

The number of job openings available in a given region or by a specific company is used as a proxy for future growth. It not only is used for estimating the future performance of a company but also to infer its geographical expansions. Companies like LinkUp are well known for supplying this data to hedge funds.

Is trading with alternative data profitable?

Trading with alternative data can definitely be profitable depending on the underlying data, its reliability, and its scarcity. Researchers continually come up with novel approaches and ideas to exploit and extract value from alternative data.

Alternative data strategies suffer from alpha decay, which is nonother than the loss of predictive power of a model over time. This is caused by the adoption over time by more market participants. Given enough investors using the same underlying strategy, the alpha will converge to zero. Having said that, the fact that satellite images are already a well-known data source does not mean that quants won’t be able to ideate new profitable strategies based on them.

Renaissance Technologies, the most profitable hedge in the history of the American stock market, is well known for making extensive use of alternative datasets in order to achieve its average annualized returns of 66% between the years 1988 and 2018.

How is alternative data created?

Due to the technical requirements for storing cleaning and organizing huge amounts of alternative data, it is usually outside the scope of most trading firms to be able to assign their own in-house resources to generate the data. This is the reason behind the increase of alternative data vendors.

Having said that, there are also countless examples of hedge funds that scrape data from the internet in order to have their own proprietary datasets. The rationale behind creating and storing alternative datasets in-house is the increased probability of having an edge that is not available to the rest of the market participants. It is common practice to have a small team of backend developers in charge of scraping, cleaning, storing, and transforming the raw data points into actionable information that can be incorporated into the firm’s trading strategies.

As we can see, there are countless opportunities for incorporating alternative data into trading strategies. In addition, coming up with novel and creative approaches to publicly known and available data is also a source for generating alpha.

Trading only based on OHLCV data, and a few indicators based on them will most probably not be enough to find reliable and robust strategies. The spike in interest for alternative data and the subsequent search for new sources will only keep increasing in the years to come.